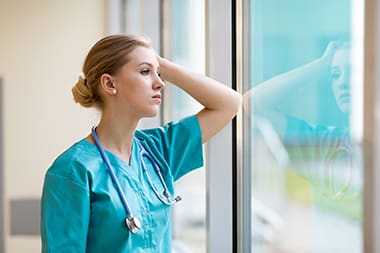 Now more than ever, many of us are united in appreciation of the vital, often difficult work carried out by our health professionals. As part of this, they meet many different people face-to-face every day. And unfortunately, people can be unpredictable; sometimes they put workers’ safety at risk.

Sadly, the fact is that health workers are much more likely to experience physical or verbal abuse than workers in most other industries. The Health and Safety Executive’s 2019 violence at work report demonstrates that, according to Labour Force Survey statistics, health and social care accounted for a massive 41% of non-fatal injuries sustained at work due to violence in Great Britain. Health workers aren’t alone in their elevated risk: education accounted for 23% while public administration and defence, which includes the police, accounted for 27%. All other industries accounted for just 9%.

The 2019 NHS Staff Survey, which excludes primary care staff (GPs, pharmacists, dentists and optometrists), helps us understand how many health workers are affected. Of the 569,440 people who responded, 17% (around 97,000) experienced at least one incident of physical violence in a 12-month period: the majority (14.9% of all those surveyed) experienced this from patients/service users, their relatives or other members of the public – for convenience, we will refer to these as PRPs.

As 52% of the 1.1 million staff invited didn’t complete the survey, the number of staff who experienced violence in that year could have been as many as 200,000. That still excludes primary care staff (there are over 40,000 GPs in England). Bullying, harassment and abuse, during which staff may feel threatened, was even more prevalent: 28.5% of survey respondents reported at least one incidence from PRPs in 2018/19.

These shocking statistics are backed up by other data, such as that from the Royal College of Nursing survey of over 8000 members, which found 29% of respondents had experienced physical abuse and 65% had experienced verbal abuse from PRPs in a 12 month period. However, as we can see from the HSE statistics, education staff and social workers face a significant threat of violence too. A poll found almost a quarter of teachers in UK schools faced weekly violence from pupils. According to the crime survey for England and Wales, 344,000 adults in all professions experienced violence at work in 2018/19, a number which, in light of the above, is likely to be an underestimate.

We have only looked at UK statistics thus far, but it’s worth mentioning that other countries have significantly higher overall levels of violent crime, including in some instances gun crime. However, it is clear from this data that there is a special need for measures to protect staff in these sectors from violence and threats – many of whom are women, over 50s or from minority backgrounds.

Employers in the UK and other countries are required by law to consider what dangers their staff could reasonably face when performing their jobs and take steps to mitigate these risks. There are a number of measures which can be taken to help protect staff from violence. UK hospitals for example typically have CCTV and security staff on-site. Personal safety alarms are another great way to improve staff safety: whether it’s in health, education, or any other industry, in any country.

Why are personal alarm systems useful?

It isn’t possible for security to be everywhere at all times, and even if a workplace should have complete CCTV coverage, a staff member has to spot an incident on the screen for someone to respond. Shouting for help can go unheard and may aggravate the situation, while attempting to use a phone may provoke an assault.

With a discreet personal alarm fob, a member of staff can issue a high-priority alarm with a single button press. As well as being concealable, this is easy to do in a high-pressure situation. However, raising an alarm is only part of the story: it’s important that colleagues respond to it quickly to minimise the risk of harm.

Multitone’s EkoTek staff safety system ensures quick response times by transmitting the location of the alarm, as well as the user’s identity and the alarm type, to designated responders – a security team assigned to that particular area, for example. By doing so, it ensures that rather than searching a whole building for an incident, the responders are directed straight to the scene. Alarm fobs can have two buttons; a blue button and a higher priority red button. Portable messenger units sounding an audio tone, along with a light-up screen in blue or red, corresponding to the alarm type, ensure a response. The alarm must be acknowledged, otherwise it will escalate to other members of staff until someone responds.

Alarm fobs can also be configured with fall-detection ‘man down’ alarms and ‘dead-man’ alarms which require acknowledgement at regular intervals. This helps ensure that should someone be pushed over or rendered unable to raise an alarm, help is summoned automatically.

The system is fully wireless and is simple and economical to install anywhere, as it does not require mains rewiring. Location accuracy can be improved simply by installing more signal repeater units, and the system can include fixed alarms as well as portable ones, allowing anyone to raise an alarm in a particularly at-risk location.

The system isn’t only appropriate for workers at risk of violence: those who work in isolation or high-risk environments who may have an accident without being noticed quickly by colleagues may also use the system to call for first aid.

Any cookies that may not be particularly necessary for the website to function and is used specifically to collect user personal data via analytics, ads, other embedded contents are termed as non-necessary cookies. It is mandatory to procure user consent prior to running these cookies on your website.

Analytical cookies are used to understand how visitors interact with the website. These cookies help provide information on metrics the number of visitors, bounce rate, traffic source, etc.

Performance cookies are used to understand and analyze the key performance indexes of the website which helps in delivering a better user experience for the visitors.