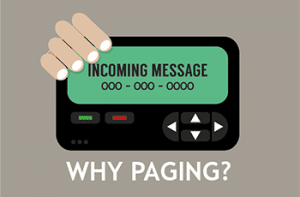 Most people know what a pager is, such is their level of ubiquity and long service history. These devices were sending dedicated text messages long before most other mobile devices were even invented, with the first telephone pager system patented in 1949 by Alfred J. Gross.

Despite their long active service, paging systems are still commonplace for the critical communications used by emergency services and a variety of other organisations around the world, and all the signs are that they will continue to be used for the foreseeable future!

Interestingly, the BBC recently produced a video entitled ‘Retro tech: When the pager was king’, an entertaining and nostalgic look at the history of pagers. Whilst the video ends by saying that emergency services still use pagers today, what it fails to elaborate on is just how vital this stoic technology still is to critical communications in general.

Equally, this does not necessarily have to be exclusive to the emergency services –  any sector where secure robust communications are essential can benefit from paging. This could be to deal with a major internal incident in a power station, warehouse or logistics centre for example, or any organisation needing to address compliance for its private campus.

Pagers offer a number of distinct and important benefits over even the most modern mobile communications devices.

Compared to a modern smart device, a pager may seem a bit light on features. However, what it does do is accurately and reliably send a clear and specific message to a highly targetted audience.

This simplicity, rather than a drawback, is one of the key strengths of paging. Using its own dedicated network, paging has redundancy engineered into it, making it one of the most reliable messaging methods.

Private paging networks also avoid the congestion of mainstream communications infrastructure. This is particularly relevant during a major disaster or emergency, where civilian communications traffic can overload a public cellular network. Whilst paging networks still queue and transmit messages sequentially, it is possible for vital priority messages to ‘jump’ the queue if required.

Why are we still using pagers with the advent of cellular and Wi-Fi?

Whilst the raft of new communications technology would seemingly be enticing in every way, there are some very straightforward reasons why pagers are still invaluable for critical communications:

One of the most obvious (yet underrated) benefits of using a pager is its enormous battery life. Recharging requirements can be the Achilles heel of many mobile devices, but the simplicity of pagers has always offered a highly attractive battery life.

Even traditional pagers can operate for six to 13 weeks using a single set of AA or AAA batteries, allowing for service over many shifts or even during prolonged outages of mains power.

Communication when it counts

In the real world the facts speak for themselves too:

Despite its long history, paging technology continues to evolve. Modern pagers can display a text message of up to 1,000 characters. They can also be combined with GSM or IoT (Internet of Things) technology to create a feedback and communication channel.

You also may not realise that modern pagers can convey voice messages as well. This isn’t just recorded messages; modern paging networks can also relay live speech in real-time and provide a perfect way of delivering complex instructions to first responders within seconds. In situations where text messages would struggle to convey the messaging fully and immediately, this is a perfect solution which makes the most of the secure and private paging networks.

Group call functionality is another popular feature. Whilst each device has a unique receiver identity code (RIC), other RICs can be shared between pagers. A group RIC can transmit an alert to tens or even thousands of pagers with just one call.

Two-way paging has also had a huge impact on pagers’ popularity. It leverages the traditional benefits of paging for outbound and broadcast message delivery, whilst supporting a return channel that carries user acknowledgement, response and location.

On top of all these benefits, enhanced encryption and increases in transmission speed have made pagers even safer and more reliable than ever before.

Paging in the future

Whilst it’s true that paging systems have already been superseded by smart devices as a consumer item, they will continue to be a stalwart communication essential for the emergency services moving forward.

With a proven record of reliability, sophistication and resilience, pagers are still just as highly relevant for these applications, well into the 21st Century.